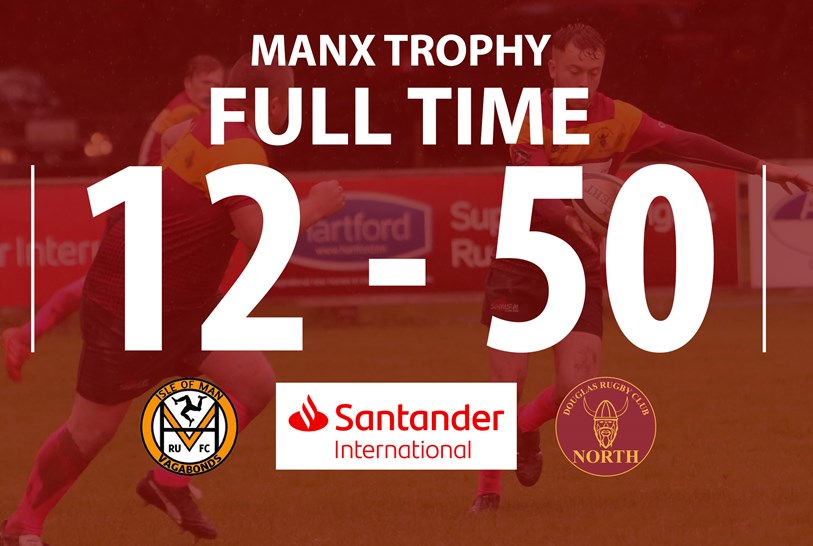 An evening kick-off under floodlights at Ballafletcher served up a raucous 10-try Manx Trophy encounter, partly prompted by a recent newspaper headline ‘Vagabonds Bring Douglas Down To Earth’ in relation to a narrow win over the second of our Manx Trophy teams. Hence Ballafletcher echoed to a crowd full of Douglas rugby supporters keen to see if the eight teenagers in a Douglas North side could hold their own against a heavier Vagabonds scrum.

But the surfeit of Vagabonds possession yielded little in the face of crunching defence, typified by Sam McCord and Charlie Henthorn, and as Douglas number 8 Lance Wyllie coped efficiently with ball on the retreat, rations of possession were treated reverentially. Hence the visitors rattled up 17 points as they either flung the ball wide or profited from Vagabond mistakes. Douglas North winger Brendan Kelly threatened with pace and guile, and in the 14th minute his first senior try was reward for constant menace after Douglas North flanker Miguel Costa’s turnover. Craig Martin’s try 6 minutes on was prompted by a Connor McCaughan burst through midfield, and twin brother Kyle forced his way between two defenders after a Vagabonds handling error gifted the opportunity for 0-17 after Luke Hyland’s conversion. The Vagabonds scrum reaped some recompense with flanker Mark Oldfield’s try in 39th minute after prop Matthew Jones and centre Ross McCulloch powered through, but Douglas North then took control in the second half.

A 5-metre scrum in the 50th minute saw the Vagabonds eight, given the first 40 minutes, inexplicably launched backwards. A penalty try ensued after a kick through to the line was illegally impeded for 5-24 and the bonus point, and substitute Niall Killey’s 62nd-minute turbocharged eruption from deep ended several phases later with a Bryn Snellgrove score. At 5-29 Vagabonds lifted the territorial siege with flanker Nathan Gibson charging out of defence and earned a penalty try of their own for 12-29 as the Luke Purdey-inspired scrum again found their feet. Hinks Senior replaced Hinks Junior in the Douglas North front-row and Craig Martin darted in for his second after Dan Creer muscled possession back. Hyland confirmed his return is reaping fruit with a try and conversion and general authority at number 10, and the result was not now in doubt. Vagabond’s front-row Matty Rockwell’s 70th minute injury departure heralded further grief for the home team, and Douglas North’s abrasive lock Jordan Hogan ploughed upfield and Killey in support plunged over to bring up 50 points.

The league leaders possibly confirmed their status as the stronger of the two Port-e-Chee sides contesting the Trophy competition, and with teenagers such as Jack Shimmin, Nathan Hinks, Conor Garland and Thomas Coleman coming on. The fixture between Douglas South and North on 28th November will go a long way towards deciding the title.