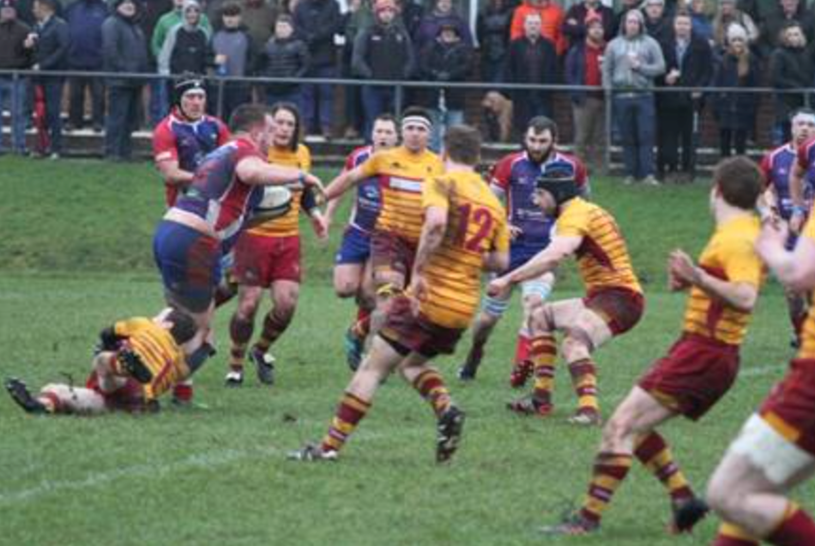 Isle of Man Examiner – ‘Old Mutual Douglas travelled to Lancashire with Blackburn’s demolition of 2nd placed Northwich in January a reminder that the hosts had not lost since December 2nd. Shorn of three first choice props, Douglas were convincingly beaten at Ramsgreave Drive by six tries to nil, and apart from a period just after half-time, it was an in-form Blackburn who took the plaudits. Number 8 Corey Logan was a thorn in Douglas’s side at Ballafletcher in October, and again was in rampaging form with a bullocking try run after 5 minutes and 5-0. Hooker Filipe Perriera was stretched off with a serious ankle injury, forcing a Douglas re-shuffle with Owen Carvin on at prop and Ralph Clark at hooker. At 20 minutes Conor Stephens took a shoulder knock and was replaced by Spencer Cope who went to winger and James Maddrell to centre. Blackburn outside half Marc Maher’s try and Logan’s second from a 5 metre scrum, with Phil Baines adding a conversion, notched up a 17-0 scorecard at half time. Maddrell pulled up with a hamstring injury and was replaced by George Blackwell at flanker and Niall Killey moved to centre. The Douglas purple-patch for 15 minutes yielded no points, despite Harry Hewson and Nick Brooker making line breaks, but the Manx side were unable to generate continuity. Logan’s hat-trick score earned the try bonus point, and Maher’s second try and Baines conversion at 60 minutes kept Blackburn in control at 29-0. Flanker Rob Bramhill’s try and Baines extra’s left Douglas nursing their heaviest margin of defeat this season and a lengthening long term injury list.