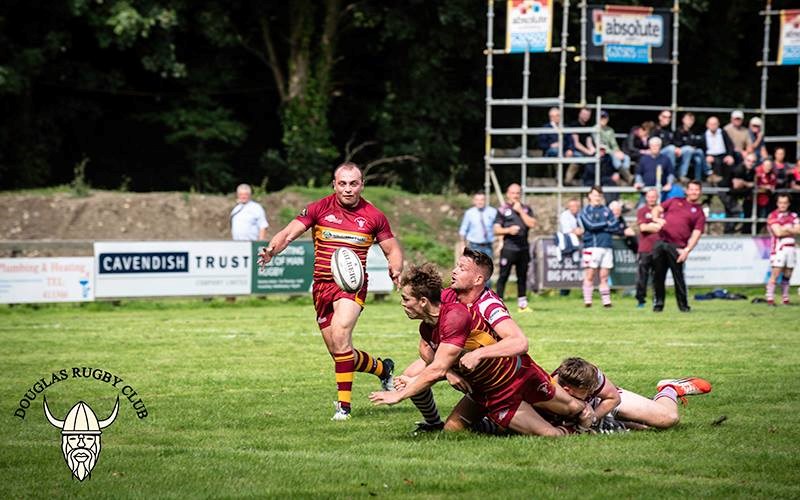 Premier North Wirral followed Hull’s example last year with a pre-season match at Port-e-Chee. As Old Mutual Douglas prepare for a second campaign in North One West, the inevitable yardstick produced a surprise as the Manx club, one Division beneath the visitors, finished stronger. Behind 0-7 after 5 minutes to a try and conversion from centre Daniel Harvey, and 0-12 when winger Ben Cornfordsprinted over after 35 minutes, Douglas were treading water as new combinations settled in. Carl Murrayon the wing and Lance Wyllie back from Australia in midfield suggested some positional experimentation, but Will Cain at scrum-half looked sharp and Guy Wood wherever he roamed was threatening. From one trademark Cain piercing run Douglas set up stall in the Wirral 22 and Murray blasted through for a 41stminute try. Aidan O’Shea’s conversion for 7-12 preceded a bust-up in the forwards minutes later that gave referee Joe Phelan no choice but to sin bin Douglas prop Dave Hinks and red card Wirral’s Graham Smith for illegal use of the boot. An uncontested scrum period ensued but astride the half time break neither side could break the stalemate. When the full front row complement resumed, Douglas were in command and the introduction of newcomer Mike Dunnett at hooker added more zip. Skipper Niall Killey and second row Max Singer were high profile with ball in hand but defences ruled until the 57thminute. A burst from Wood between two defenders and the deftest offload found Dunnett in support to rumble over and O’Shea’s extra’s guilded the Douglas lily. The remaining 20 minutes Wirral had to rescue a result in truth never looked enough to wear down an efficient home defence, and once Harvey missed a 78th minute penalty, Douglas were home and hosed.