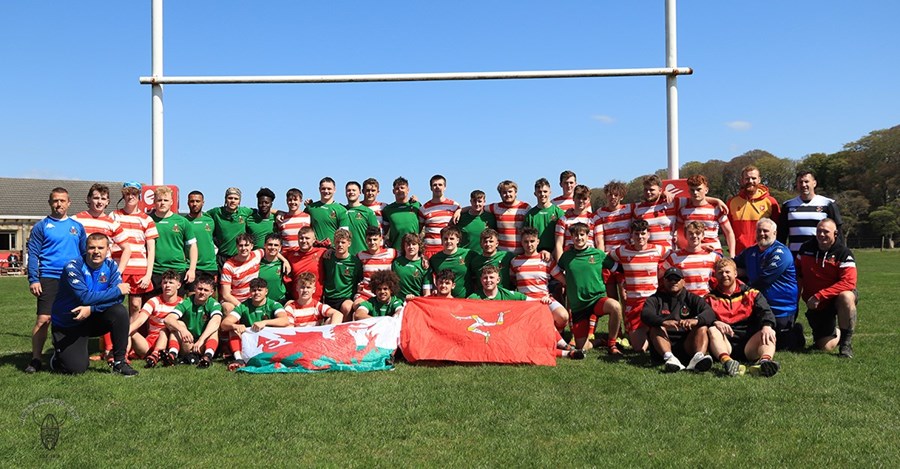 The IOM Schools Rugby team hosted the Boys Club of Wales at Douglas Rugby Club over the weekend, in what were some tough but rewarding fixtures for the Manx boys. The Welsh side came to the Isle of Man following a mini touring series of England playing different representative sides and academies.

The Sale Sharks (IOM) DPP were the first opponents of their tour on Friday afternoon, and it was soon evident who the Island were up against. Boasting a number of young Ospreys, Scarletts and Cardiff Blues academy players, the Welsh outfit were a class act. Their skilful, fast flowing, high intensity rugby was a joy to watch on the side line, but tough to play against, and despite some excellent spells by the Manx boys they come off second best. Captain Rob Doherty really led from the front in what was a gruelling but valuable experience for the boys.

The U18 Welsh side then played the IOM Schools side, a representative side including all 6 island schools along with UCM. The visitors started strongly, looking to keep the ball alive at every opportunity and punish the Manx team with their skill and pace. Playing against the wind in the first half the IOM found it tough to exit their own half and it took a while for the boys to get used to the intensity required. After conceding a few tries the Manx lads came to life with Ethan Kermode, Aaron Hempsall and Jake Richmond causing problems in attack. Toby Poole-Wilson carried well at 8 and was handed the man of the match award by his opponents for his troubles. As the Manx team put some phases together and upped their level of aggression at the breakdown, the Wales boys were on the back foot and when Harry Wallis and Stephan de Beer pulled two tries back, it showed the crowd at Douglas Rugby Club what the IOM Schools players are capable of. In the second half the Boys club of Wales stepped up again and showed their class and ruthlessness with a number of well worked tries to win the game, but it was the Manx lads that kept pushing and came back with a wonderful team try finished by paceman Tony Quinn under the posts.

An Isle of Man Schools U16 team played on the Saturday morning and with several boys playing in both fixtures despite some tired bodies. The team applied themselves well and worked together to nullify the Welsh attacks, but as the game went on the constant defending took its toll on the boys and they came up second best. George Curphey at full back was a threat throughout, impressing the Welsh coaches who awarded him the U16 Man of the Match.

The U18 game on Saturday was a different starting XV for the IOM schools’ side, showing we have many talented rugby players at U17 and U18 across the Isle of Man. The Welsh lads started fast, showing slick handling skills and a great offloading game to score two early tries. The Manx boys fronted up to the task and really dug in, having some success of their own and causing problems for the Welsh side in midfield. Tom Collister was a thorn in the side of the Welsh all game, with big tackles and carries from centre. A well-deserved try came at 60 minutes, but it was to no avail as the Welsh side did some further damage as the Isle of Man tired towards the end.

Despite coming off second best all weekend, the boys can take pride in their performances and the IOM side can hopefully use these games as a catalyst to push our U18 Rugby on Island on further. Scott Quinell was down to watch the games after speaking at a dinner at the Hilton the night before and the former Welsh International and School of Hard knocks star paid tribute to the Manx boys heart, commitment and attitude, stating that he was very impressed. This is the first time the IOM Schools team has been able to come together for 2 years with no opportunities to travel, so with some hard work I am sure the boys will grow together from these experiences.

A huge thank you to the referees and everyone at Douglas Rugby Club for hosting what was a fantastic weekend of Rugby for the Isle of Man.

Full set of pictures can be found at - https://flic.kr/s/aHBqjzLZmX