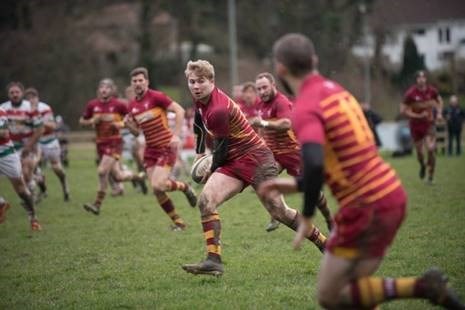 Isle of Man Examiner – ‘Old Mutual Douglas shrugged off the unavailability of thirteen squad members through injury and holiday to take the winners points and stay 5th in North One West while fielding five teenagers against a Stockport side with ex-Sale Shark and England cap Dean Schofield at the helm. The heavy going exacerbated by overnight rain failed to curb a contest every bit as gripping as the 26-25 result in October at Bramhall, and both sides entertained a large Port-e-Chee crowd. Max Singer set out the Douglas store with shuddering tackles, and Shaun Wyllie was in snappy mode at the base of the scrum. Douglas had an initial edge in the tight which lead to Aidan O’Shea shanking a penalty to the corner after 20 minutes. Stockport’s counter was hoovered up by Max Morley-Green and he fashioned space for Nick Brooker to skin his opposite number and angle past the full-back to score. The Douglas line-out was not the usually reliable source of possession, with Schofield and Andy McFadden doing most of the spoiling work for Stockport, but the Douglas back-row performance, with Craig McGee in rampaging MoM form, limited Stockport opportunities so much that a Liam McGovern penalty was all that could be wrung from a clinical Douglas defence by half time for 5-3. Jordan Pearson at number 8 for Stockport was influential in defence and attack, but getting little change from his opposite number Liam Kirkpatrick, while Sam Games will have enjoyed stepping past Schofield in open play. Owen Carvin at prop, Spencer Cope at scrum-half and flanker George Blackwell arrived off the bench to join Harry Hewson and Kirkpatrick as the teenage Douglas quintet. A long range penalty attempt by McGovern fell short after 60 minutes, and when Morley-Green raced in for a try after faithfully supporting O’Shea, Hewson and Conor Stephens probings through midfield, the 12-3 score line with O’Shea’s conversion looked a done deal. The deal was certainly done when Stockport got no change out of Hewson and Stephens in midfield and Pearson was yellow carded. The final whistle consigned pointless Stockport to 7th in the league standings, while Douglas move to six points ahead of the visitors having played one round more.‘