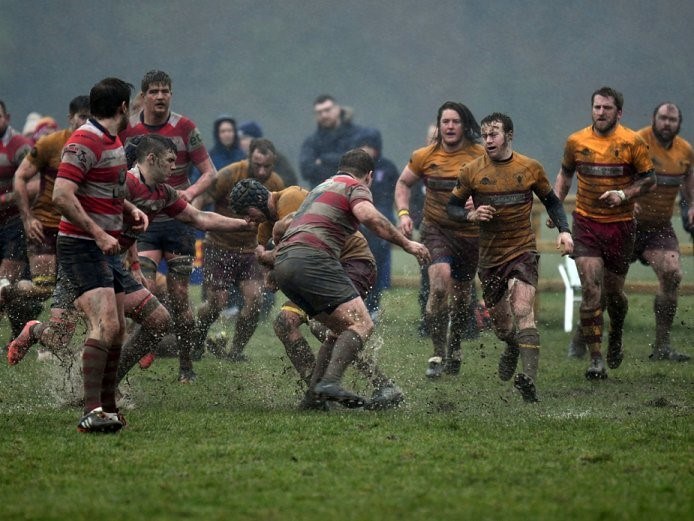 Isle of Man Examiner - Old Mutual Douglas literally slipped up against league leaders Vale of Lune when two tries from the visitors in the opening 10 minutes sank the hosts at a sodden Port-e-Chee. Lock Sam Wallbank slithered over to score courtesy of a wrong-footed and sleepy Douglas defence just 2 minutes in for Damen Hall to convert. When full-back Ben Dorrington finished off a sweeping move that stretched the Douglas line wide right then touchline left beyond breaking point, the 0-12 deficit in the trickiest of conditions looked to be a very wet mountain to climb. Douglas though are nothing if not resilient and began building up a head of steam which pinned Vale back with pick and go around the fringes as Akkie Van Den Berg and Paul Leivers lead the way. Aiden O’Shea kept the Vale back-row interested with ball in hand variations and Bryn Snellgrove converted a penalty when Vale illegally halted a rolling maul for 3-12. The Vale defence thereon stubbornly and continually found a way to relieve the pressure, occasionally aided by a Douglas knock-on here and a turnover there. After the break Douglas butchered a try-scoring opportunity with a spill as the ball went wide and winger Nick Brooker looked good to go, only to convert another closer in when Glyn Hooson-Owen barrelled over from a surging maul. Snellgrove missed the conversion, and a penalty chance from 40 metres when the non-kicking foot simply lost purchase, but the introduction of Will Cain off the bench at scrum-half improved Douglas dynamics. Hall converted a penalty in front of the posts for 8-15 at the 60 minute mark when Vale seized on a Douglas error to hack upfield, but still Douglas had the territorial upper hand and Cain’s quick service was encouraging. Carl Markl-Ferns was in typically irrepressible mood and Robert Todd powered up the front row off the bench, but Douglas could not make the all-important break as Vale defence demonstrated why they are the most parsimonious in the Division. Harry Hewson was well marshalled at centre by opposite number Fergus Owens, wingers Adam Boyd and Brooker were not having their busiest days, and as conditions worsened underfoot, so did Douglas chances of making the score needed as the clock counted down. Starting the day in 5th and within striking distance of a play-off spot, the losing bonus point kept Douglas in 7th amongst the cluttered midfield league table as they briefly dwelt on what might have been.